“For no one can lay a foundation…”

JohnDozPosted on December 14, 2016 Posted in Training Table — No Comments ↓ 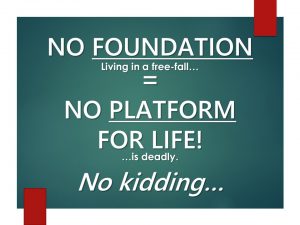 …other than that which is already laid, which is Jesus Christ (1 Corinthians 3:11)!

Ever Try to Feel Secure, Purposeful, Passionate… In the Midst of a Free-fall? I have…

In just one of many tiny and tumultuous examples, during my rock climbing life mostly in the Rockies I was leading a pitch—on “the sharp end of the rope”—about 30’ out from the last piece of protection I placed in the rock; I had a secure anchor, a good belay, and a solid harness around my midsection. Things got dicey, some unexpected loose rock provided few holds and little traction, and the fall was terrifying, BUT my fall was arrested, and I was secure. The 60′ foot fall resulted in a few bumps and scrapes, but could have been deadly had I not relied on the foundations of the sport.

What we’re chowing down on today is the terrifying part, with no real sense of rock-solid security involved, just doing life in the midst of a free-fall… and without a rope.

This week, while re-reading parts of Greg Koukl’s book “Relativism: Feet Firmly Planted in Mid-Air”, I was blessed in many ways by the very apt and timely content of the book. The name of the book and ministry Greg co-founded, Stand to Reason, is the perfect set-up for some tasty and heart-nourishing feasting today:

Both the title of Greg’s book, and the reason that Stand to Reason exists, ties into today’s Training Table fare: E.g., It stands to reason that when any human being is living life devoid of a timeless, well-thought-out, and rock-solid foundation for their life, he or she cannot be expected to have a platform for living out the grand and granular parts of their life.

An immovable-foundation is meant to act as a platform for living life day-by-day. Foundations exist to be built upon—and the worth of any human life is a “tall order construction project”, right?!

Or, said another way: When any human being jettisons reason, the foundations of life will give way as well; and flailing against the air is the only platform for life that remains. This is not a workable way to love and live. In fact, it’s impossible… unless we accommodate a false premise and mitigate the terror by means of distraction, denial, delusion, self-deception, and idolizing lesser gods.

No human being can live the life God has designed for him or her with Feet Firmly Planted in Mid-Air! It’s not the nature of God… in us. (Genesis 1:26-28; Psalm 139) “The tragedy of modern man is not that he knows less and less about the meaning of his own life, but that it bothers him less and less. . .” (Os Guinness, The Call: Finding and Fulfilling the Central Purpose of Your Life)

Beloved of God in Christ, there is no human being that can live this way: to boil things down to the most elemental way it can be said, humans, Image Bearers of God—born from, out of the everlasting glory and entire weight of the God of the universe—cannot flourish while living in a free-fall of nihilism and the chaos of existential angst which ensues, pervades the spiritual, emotional, mental, and physical self.

It’s simply not possible… unless we dumb-down the definition and expectation of what LIFE is meant to consist of.

Oh yes… and said as respectfully, lovingly, and truthfully as I can muster… if there ever was time in Western civilization where masking, covering-up, dressing-up, and “playing the part” was not just fashionable but as ubiquitous as dust, it is now: as strange and near-sickeningly ironic as anything could be, the practically limitless creativity, imagination, and inventive capabilities GOD “borrowed from Himself” and infused into His consummate creation humankind, is today being used to suppress the Truth and Love of God!

We have become so desperate, adaptable, and adept at compensating for the terror of living in a state of “foundationless freefalling”—with no platform, springboard for living out our life—that putting on a good face is as rote as breathing. And even though there is nothing that is more deadly to our heart than this, the marketplace of ways we can cover-up the terror of living life “kicking against the wind” is practically endless. The demand is there in spades, and the human ingenuity is more than ample to offer a dizzying array and supply of distractions.

As Os Guinness says of CALLING—which is simply another way of saying a having FOUNDATION and PLATFORM for life: “We are not wise enough, pure enough, or strong enough to aim and sustain such a single motive over a lifetime. That way lies fanaticism or failure. But if the single motive is the master motivation of God’s calling, the answer is yes. In any and all situations, both today and tomorrow’s tomorrow, God’s call to us is the unchanging and ultimate whence, what, why, and whither of our lives. Calling is a ‘yes’ to God that carries a ‘no’ to the chaos of modern demands. Calling is the key to tracing the story line of our lives and unriddling the meaning of our existence in a chaotic world.” (Os Guinness, The Call: Finding and Fulfilling the Central Purpose of Your Life)

Devoid of God’s foundations of Truth and Love, chaos will reign!

Creation:
Then the Lord God formed the man of dust from the ground and breathed into his nostrils the breath of life, and the man became a living creature. (Genesis 2:7)

“Re-Creation” / Conversion:
Or do you not know that your body is a temple of the Holy Spirit within you, whom you have from God? You are not your own, for you were bought with a price. So glorify God in your body [and whole being]. (2 Corinthians 6:18, parenthesis added)

Consequences of Suppressing God’s Truth and Love:
For the wrath of God is revealed from heaven against all ungodliness and unrighteousness of men, who by their unrighteousness suppress the truth. For what can be known about God is plain to them, because God has shown it to them. For his invisible attributes, namely, his eternal power and divine nature, have been clearly perceived, ever since the creation of the world, in the things that have been made. So they are without excuse. For although they knew God, they did not honor him as God or give thanks to him, but they became futile in their thinking, and their foolish hearts were darkened. Claiming to be wise, they became fools, and exchanged the glory of the immortal God for images resembling mortal man and birds and animals and creeping things. (Romans 1:18-23—and forward to v32 for more consequences)

I would be understating the dilemma by saying that any human being who is living apart from the foundations God created to do so is scarcely living at all… BUT BY THE COMMON-GRACE MERCIES OF GOD—so that [only that] he or she might someday before he or she dies come to a repentant, saving, and outlandishly purposeful relationship with Jesus Christ! For This IS Life.

By “understating the dilemma” I mean that we so desperately need what the Triune God of the Bible offers all of humanity as a foundation and platform of, for life that it’s quite impossible to say enough.

It’s First About the WHO, HOW, and WHY We Were Created: Let’s Take Five.

1. Q: What is the chief end of man? A: Man’s chief end is to glorify God, and to enjoy him forever

4. Q: What is God? A: God is a Spirit, infinite, eternal, and unchangeable, in his being, wisdom, power, holiness, justice, goodness, and truth.

5. Q: Are there more Gods than one? A: There is but one only, the living and true God.

IT’S WHAT GOD MADE FOR OUR FOUNDATION and PLATFORM FOR LIVING. Is it wise to snub our nose at such a wide and deep mercy as God’s Plan of Redemption:

Please consider this, fallen, rescued, and high-flying Saints of Christ: of all the millions of interconnected systems the NASA Space Shuttle liftoffs require, a precision launching pad is in the topmost few for success! And the importance of this foundation for launch and platform for success is the shell-debris of peanuts… COMPARED TO YOU!! And the Image Bearers of God in your circles of influence and concern.

Do you believe this to be truer than true… of you?

“For no one can lay a foundation other than that which is laid, which is Jesus Christ” (1 Corinthians 3:11). Amen. And Amen.

May God the Spirit touch your heart in such a powerful and personal way that that foundation of your life acts as a platform for all of life for you!
JohnDoz

Foundations of the Faith, Ligonier Ministries

Foundations of the Faith, Grace to You

Foundations of the Faith, The Gospel Coalition

Foundations of the Faith, The Bible (ESV)